Dr Ivor Blumenthal - 13th Apr 2021 0
Those of us who operate in a wide range of workplaces - across all sectors and industries - will have noticed a sea change in the volume and nature of collective industrial action. Work stoppages, illegal strikes, go-slows and massive amounts of peer-to-peer intimidation amongst employee's, especially unionised workers, have increased.

Dr Ivor Blumenthal - 4th Nov 2020 1
The DTI has failed business in exchange for being BBBEE politically correct! The Department of Trade and Industry have shown an astonishing naivete at best and total disregard at worst for business sustainability, in not extending current BBBEE certificates for at least a year, because of COVID-19.

The Demonisation of Business by Government and Labour

Dr Ivor Blumenthal - 12th Aug 2020 0
Blame "Capital Monopoly" if you must, but blame "White Monopoly Capital" at your peril. The South African Government's strategy, when dealing with the economic fallout, has been to set itself off against Business squarely, being the demon in society, while characterising Government as the White Knight out to protect society against the ravages of bad Business.

Maarten Ackerman - 26th Feb 2020 0
Sparking an immediate celebration in the rand and bond markets, the 2020 Budget Speech ticked all the right boxes for markets, depicting a government that is reform-minded and ready to show its muscles.

New or higher taxes won’t work, and could be unconstitutional

Martin van Staden - 18th Dec 2019 0
The trade union federation Cosatu recently called for tax increases, particularly on the wealthy, to arrest South Africa’s economic down spiral. But economist Arthur B Laffer, known for popularising the Laffer curve, shows us that beyond a certain point, tax revenue will decline as tax rates increase.

Martin van Staden - 18th Sep 2019 0
Legislation which governs hate speech must be interpreted in line with the constitutional right to freedom of expression, and anyone who is accused, or who accuses others, of hate speech, must be treated equally without regard to their inborn characteristics. 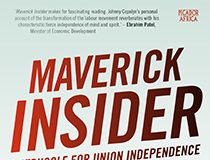 A STRUGGLE FOR UNION INDEPENDENCE IN A TIME OF NATIONAL LIBERATION

James Scott - 21st Jun 2016 0
In 1973 the trade union movement was both racially and regionally divided. It virtually excluded African workers, and in many cases unions were led...